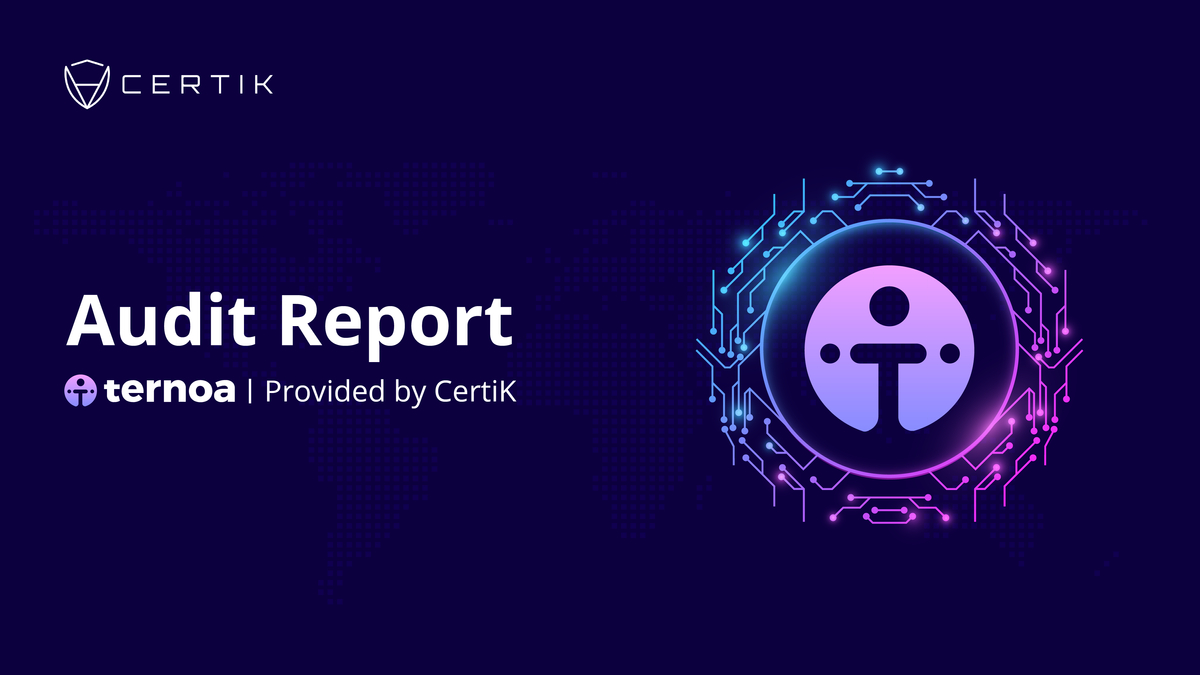 We’re happy to announce that the implementation of Ternoa blockchain’s native token CapsuleCoin, was successfully audited by CertiK Professional Services Division. In this spotlight, we elaborate on the scope of the audit, as well as present some of the issues found during the auditing process.

Ternoa is a Polkadot ecosystem parachain, build to upscale the NFT sub-culture to its next level of existence offeringtime capsules, cross-chain, and cross-platform NFT interoperability, and highly secured and encrypted on-chain, in association with Sia, Storj, and Arweave to mention a few.

An array of protocols in the form of autonomous smart contracts empower digital assets registered under Ternoa’s ledger to act on their own accord, depending onxscenarios, eg. ensuring the accurate transmission of your data after you die.

The initial review was conducted between February 6th, and February 9th, 2021, by CertiK security engineers Alex Papageorgiou, and Angelos Apostolidis.

This report represents the results of CertiK's engagement with Ternoa’s implementation of their Capsule Coin token smart contract. Our findings mainly refer to optimizations and Solidity coding standards. Hence, the issues identified pose no threat to the safety of the contract deployment.

The in-depth investigation of the smart contract in question included Static Analysis and Manual Review techniques. The auditing process focused on the following considerations:

Only four (4) findings were identified and presented in the vulnerability summary, of which the entirety was of informational nature. No major or critical issues were found during the auditing process, and the Ternoa team alleviated all findings highlighted by the CertiK Professional Services team, pointing towards a well-written contract by the team’s engineers.

You can review the full audit here.

Ternoa is a blockchain project whose main goal is to allow its users to store and transmit memories and digital data, using multiple sending protocols. Thanks to the Ternoa Blockchain, users are guaranteed to be the only ones who can manage the access, transmission, and availability of their data. Aiming to be a Polkadot parachain, the project is built around a blockchain network based on the substrate framework, using NFTs in an innovative way, and is connected to decentralized storage blockchains.

The project is powered by the Capsule Corp team, originally based in France, and aiming to reach the global market.

Starting in 2020, Ternoa successfully attained a fast-growing and supportive community that helped them close their first pre-sale in just a few weeks last November, and gained 9000 users on their app following their airdrop operation. In January 2021, they released their first Chaos Net, and are now planning many releases in the following weeks, including a new wallet app, their second pre-sale with a unique NFT concept, and an NFT marketplace.

You can follow them on their different media to keep up with the project and don’t miss out on the next opportunity to catch some CAPS or join their community.