Popular Substrate Projects Building In 2020 And Their Frameworks 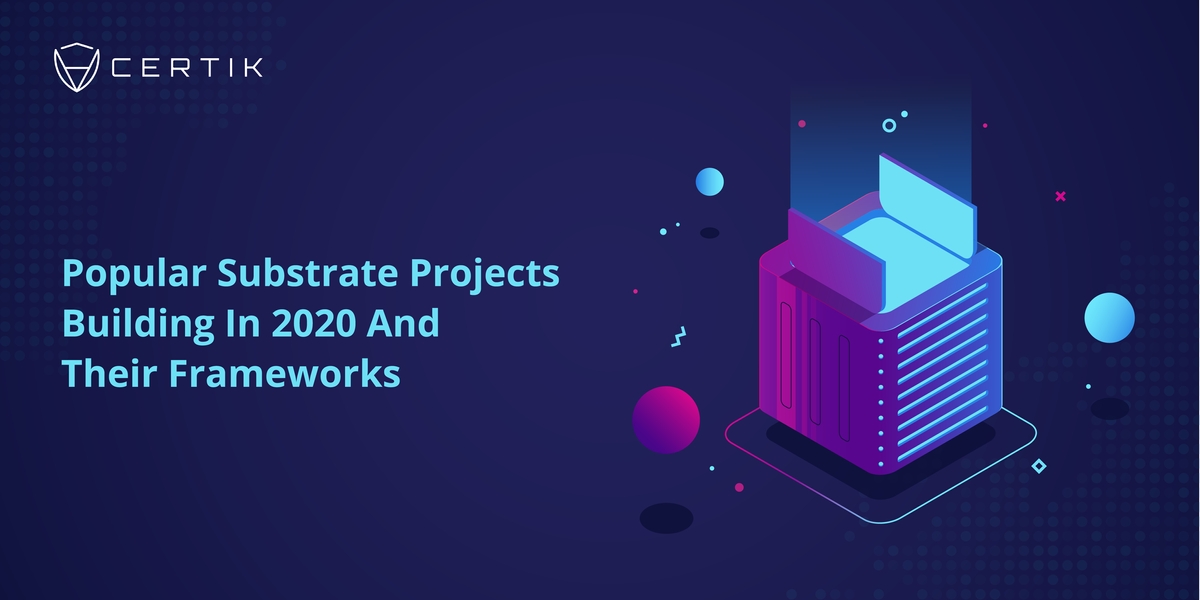 Since its launch, Parity Technologies has come out with cutting-edge products and solutions revolving around open-source software for building the next-generation Internet, namely Web 3.0.

Some popular products include Polkadot, a network protocol for connecting independent blockchains, and Parity Signer, a secure offline solution for turning your old smartphone into a cold storage wallet.

Furthermore, Parity has built Substrate, an innovative, modular framework for building blockchains. With Substrate, you can build your blockchain in a customizable fashion quick and easy, as the framework has been built upon the battle-tested advancements of other major blockchain protocols.

Additionally, there is a wide array of perks that come with using Substrate, such as cross-language support, light client-first design, forkless runtime upgrades, and transparent decision-making.

As Dr. Wood, co-founder of Parity Technologies demonstrated back in 2018, it is possible to code and launch a new blockchain in under an hour using Substrate.

Recently, the Substrate team released a new updated version of the framework. The 2.0 release came out with several new features and updates, introducing new functionality standards.

Since a detailed overview of the recent highlights goes beyond the scope of this article, the key take-away point here is that all new additions, such as off-chain workers and several composable modules, have fortified Substrate 2.0 and constituted it a more stable foundation for building production-ready blockchains.

Drawing from the news regarding the 2.0 release, let’s review some of the most popular substrate projects and their frameworks that are building in 2020.

SubstrateIDE is a project developed by Obsidian Labs, a global blockchain tech company that is providing professional dev tools and enterprise solutions for leading blockchains. Not long ago, the company developed an IDE for Substrate to speed up the process for developers building Substrate-based blockchains.

The project includes several new features that are undoubtedly making the process of building a blockchain more of a seamless experience for developers.

To begin with, templates with both the node and frontend are available for creating a new Substrate blockchain, while, besides the development, the IDE is also providing visual structure allowing to preview the frontend.

Additionally, interacting with the chain and Substrate nodes became easier and more accessible with the development of the integrated polkadot.js explorer and polkadot{.js} extension.

The explorer is a web portal that can be accessed as a hosted app or an IPFS hosted version and allows for exploration in any of the supported chains within the Polkadot and Substrate networks.

The polkadot{.js}extension is a simple browser extension that is solely responsible for managing accounts and making them available to any dapp pulling signatures from these accounts.

Overall, it seems like the SubstrateIDE is a worthy addition to the ecosystem, as many tools are now much more accessible, and interactions with contracts and chains became smoother and more dev-friendly.

Zurich-based Zero Technologies is focused on improving the sustainability of videogame economies for both the players as well as the creators.

GameDAO is a “decentralized autonomous cooperative” providing crowdfunding for video games, creative content, and e-sports, while it also has its native governance token, GAME.

The DAO provides matchmaking and crowd-based funding instruments that connect and empower users, ranging from gamers and creators to publishers and investors.

Describing itself as a financial protocol committed to suit the needs of decentralized and autonomous community economies, Akropolis is offering products pertaining to saving, growing, and scaling solutions.

The project’s mission is to offer users the right tools that will empower them to engage in several financial practices with higher accessibility and without centralized intermediaries involved.

Based on this notion,AkropolisOS was developed as a modular, Solidity framework that allows builders to create and scale for-profit DAOs, whether they are dapps or protocols, that involve savings, pensions, loans, and investments.

Akropolis has its own native token, AKRO, which can be used as a governance token managing protocol parameters.

Also built on top of the AkropolisOS, Sparta is a credit pool, appealing more to DeFi users, which grants them access to under-collateralized loans, allowing for both active and passive liquidity contributions as well as risk-related rewards.

The Akropolis Sparta Pool (ASP) has its native ERC-20 token, ASPT, which gives users the right to vote for decisions related to investments and access to loans.

Lastly, Delphi is the team’s most recent project, still under development, also built on the AkropolisOS. Delphi is a platform that would allow users to automate their DeFi-related practices in a clean, user-friendly environment offering curated access to different yield farming opportunities as well as investment options, such as savings, investments, dollar-cost averaging (DCA), and staking. ADEL is the native token designed specifically for governance within Delphi.

Interestingly, there are a few upcoming features that revolve around creating a more seamless experience for users, particularly those unfamiliar with cryptocurrencies.

According to the roadmap, the possibility of connecting your debit card and using a convenient fiat on/off ramp as a crypto/fiat payment gateway are currently in progress yet not a far-fetched reality.

Built on the Substrate framework, Darwinia Network is an open cross-chain bridge protocol focusing on decentralized cross-chain tokens swap, exchange, and market. The project’s vision is to build the “future Internet of Tokens”.

As of now, Darwinia Network is the first game chain on Polkadot, planning at a later point to become a parachain of Polkadot’s network. In case it would be voted off the parachain set, Darwinia would still exist as a solo chain being solely in charge of its security.

Another cutting-edge application is a decentralized NFT auction market powered by the network. NFT auctions of different blockchain ecosystems are supported through cross-chain auctions and create a new reality of NFT cross-chain circulation.

Last but not least, Darwinia Network has released its native token, RING token. RING is a system token used as gas for transactions, whether that would be transaction fees, contract fees, storage fees, network bandwidth charges, etc. RING tokens will be distributed by the network incentivizing users that participate in staking.

Ocean Protocol is a protocol created for providing software tools to developers for building data markets and managingdatatokensfor use in DeFi. Its vision is to lay the foundation for a “New Data Economy”, where data governance is in the hands of the data owners who are in turn enabled to capture economic value from their data.

The protocol enables each data service to get its ERC-20 datatokenwhich can be managed via the public Ocean JavaScript and Python drivers.

In turn, the tokens allow for the creation of data wallets, exchanges, and co-ops, where tokens can be transferred between owners and liquidity pools can be created for buying, selling, or swapping tokens, while there is ERC-20 support for JavaScript, Python, and Solidity that allows for connecting datatokens with cryptocurrency wallets and other DeFi services.

The Ocean Market dapp is essentially a marketplace for searching, publishing, buying, and selling datasets within the Ocean Network in a transparent and decentralized fashion.

Additionally, developers can make use of the available open-source libraries should they want to build their unique data-exchange app.

The native token of the protocol, OCEAN, is a utility, ERC-20 token used to stake on data, participate in governance, as well as for transacting with data, either as a buyer or seller.

The purpose of this project is to unify the different standards available when it comes to Blockchain-based data transactions.

“I personally think the emphasis on "main net" to evaluate the validity of a project has been rather harmful to the entire Blockchain ecosystem.”-says Xin Sheen Hu, Co-founder, and CEO of MXC.“Imagine a world in which you have Windows, macOS, Linux, Android, iOS, and another 400 other "operating systems" that do not integrate with each other.”

“That is what is happening in the Blockchain ecosystem right now. That is why we are working together with other projects to build Data Highway DAO (DHX) to create the first-ever cross-chain data marketplace, bringing these different main nets together to create a unified marketplace for all things data. The team at MXC evaluated a lot of cross-chain communications.”

Polkadot brings the ideal framework to the table, considering that substrate is lightweight and highly customizable. Polkadot’s rapidly expanding ecosystem, enables participants to contribute with, as in offer, and be able to buy data in a decentralized fashion.

Our value proposition is bringing the first cross-chain IoT data marketplace to life, through DHX, whether provided directly by MXC or other web3 data providers. Some inputs would come from IoT-relevant tokens such as IOTA, IPFS, and Filecoin. In addition, such integration also enables the infrastructure for cross-chain staking.

That means that token holders of various tokens such as MXC, IOTA, IPFS/FIL, will be able to stake their tokens to receive rewards in DHX tokens. That will be a unifying force to bring all the Blockchain data protocols together to actually serve their function rather than building their own main net that has proven to be inefficient at achieving integration and interoperability.

We at CertiK strive to secure the cyberworld regardless of the nature of each project that might be entrusting the integrity of its operations on DLTs and smart contracts and our numbers are loud about it.

Over the past years, we've audited and secured more than 150 smart contracts, and over 25 whole chains, while our security experts have performed more than 20 VAPTs for top-shelf industry pioneers including but not limited to Binance, Tera, Kava, e-Money, Fetch.ai, Akropolis, Bancor, Shapeshift, and Blockstack.

To learn more about smart contracts, and find out the most optimal way to secure your next venture, don't hesitate to connect with one of our engineers and get a free consultation today.